Own A Copy Of E.T.: The Extra Terrestrial – The Never-Released Atari Game 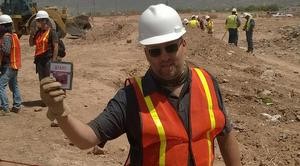 No doubt you’ve heard about the recovery of the failed E.T.: The Extra Terrestrial games that were buried in a New Mexico landfill in the ‘80s. If you haven’t, then what you need to know is that a man, James Heller, was assigned the task of cheaply disposing of 750,000 copies of the failed game back in 1983. In true Speilberg adventure fashion, Heller also reports that kids raided the dump site before cement was poured over it. I wonder if they rode their BMX bikes through a new housing development to accomplish their heist.

Ah yes, the stuff of legend.

So, some documentarians decided to unearth the gold (did the use the the Staff of Ra?), and along with it some pristine copies of Centipede and other titles. The haul of E.T.: The Extra Terrestrial amounted to 1,300 cartridges.

Now you’re wondering, “How the hell do I get my hands on one of those?”

Well, you’re in luck. According to Gamespot, “these cartridges will be appraised, certified, and put on sale at the New Mexico Museum of Space History, the Alamogordo City Commission announced this week.”

But not all 1,300 will be up for grabs. Only 700 will be available for purchase, while the remaining 600 will be sent to museums. It hasn’t been determined yet if the games will be for sale via the Internet.

Also, Microsoft has paid for a multi-part documentary about the E.T. excavation, which will be available exclusively on Xbox platforms sometime this year.