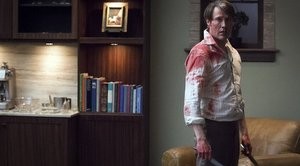 And so, Hannibal, Season 2, ends, and we have no idea where Season 3 will take us, other than France, presumably. Considering that the series was in jeapordy of not being renewed earlier this season, this Season Finale would have felt very satisfying if it had served to be the Series Finale, albeit very depressing and forelorn.

From the start we knew where this episode was going to go, for the most part, but the journey to get there was half the fun. So much about the “Mizumono” was perfectly amazing. The near perpetual tick-tock of the score/sound effects added a wonderfully simultaneously conscious and subconscious sense of urgency, yet David Slade kept the pace steady and unhurried. The opening sequence with Graham’s duplicity and/or indecisiveness kept us on edge throughout the episode, wondering which way he’ll sway (Hannibal/Crawford to Graham: “When the moment comes, will you do what needs to be done?”). The overall dialog and reintroduction of supporting characters rattling our brains with questions about “What does it all mean?” And, last but not least, the epic battle splatter scene that dominated the episode’s conclusion.

But let us not forget, or underestimate, the sympathy for Hannibal Lector that this episode managed to ellicit. If you don’t believe it, check your heart when Hannibal embraces Graham and offers him a faster way out after gutting him. For what was probably the first time ever Hannibal believed that he had a comrade in Graham, a partner, a sympethizer… just someone who understood him and his motivations. But in the end all he discovered was that Graham had betrayed his trust and double crossed him. It’s like believing you have an epic Shakespearean love, only to find out that your lover has sleeping around.

It all came crashing down when Hannibal caught a wiff of Freddie Lounds on Graham. In that moment, all of his talk about his “memory palace” and escape with Graham disappeared and moved his “punctuation mark.” It “moved his meaning,” to echoe what Bella had said to him earlier in the episode. And contrary to what Bella said to Hannibal about forgiveness (“Forgiveness is such a profound conscious and unconcious state of affairs; you can’t actually choose to do it, it simply happens to you”), he chose to forgive Graham, lamenting, “Now that you know me, see me. I gave you a rare gift, but you didn’t want it.” But not only that, Hannibal outright says he forgives Graham, but it’s a double-edged blade when he asks Graham if he would return the favor, just before giving Abigail Hobbs a Colombian necktie. You could ask, “Well, how much genuine forgiveness is there in that?” Well, don’t forget that this is Hannibal Lecter and his sense of reality is different than yours.

What’s that? Did I just say that Hannibal killed Abigail Hobbs? Yup, I did. And what did Abigail do in the first scene of her big return? She pushed Dr. Bloom out of a second-story window to her inevitable death. When Graham was reunited with Abigail, his surogate daughter, she said to him, “I didn’t know what else to do so I just did what he told me.”

We all had our doubts that Abigail was actually dead, and in retrospect it seems likely that Beverely saw Abibail held captive in Hannibal’s basement. But why was she kept alive? She was what was going to bring Hannibal’s tea cup together again. In Hannibal’s words, “the place was made for Abigail in your world,” suggesting that Hannibal had long planned to transform Graham and kept Abigail for a prize gift.

But with Crawford bleeding out in the pantry, Bloom dying in the rain on the sidewalk, and Graham’s and Abigail’s impending fatal wounds, the most profound thing said was Graham’s response to Hannibal’s querry about Graham thinking that he could change him, which was “I already have.” And it’s true; Graham manipulated the master manipulator, and because he did, he won.

Perhaps less significant to the overall episode was Kade Prurnell interference with Crawford’s case, calling it entrapment and putting Crawford on forced compassionate leave. But as Bloom told Prurnell, Crawford knows what the FBI do and that knowledge won’t stop neither him nor Graham from going forward with their plan to catch Hannibal in the act. In fact, it only pushed them into action sooner.

In the bloodbath of Hannibal’s kitchen we don’t actually see anyone die. We can be sure that Abigail dies, and probably Crawford, who calls his wife from the pantry with his dying breath. Can we be sure, however, that Graham will die or Bloom? Especially with the two placed calls to emergency services? It’s a safe bet though since Graham has a vision of a stag dying along with him… and would the showrunners really give us that final scene with Hannibal and Du Maurier on a flight to France, sipping champagne?

-If Prurnell intended on having Crawford and Graham arrested, why did she just let Crawford leave?
-Although it wouldn’t really be suitable in this season finale, I did miss some of the black humor we’ve seen throughout the season. The only spot of humor, as subtle as it was, was perhaps Prurnell’s Sex and the City walk into the meeting with Crawford.
-And the big question, what does Season 3 hold for us?