Hannibal, Season 2 – “Tomewan” – Or: If I Could Eat Myself, I’d Never Leave Home 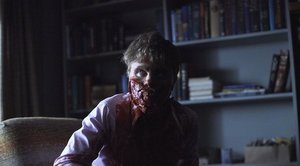 At this point in the show, with one episode remaining in Season 2, it’s difficult to say if Graham is winning or losing this battle of wits with Hannibal. In his win column goes his liberty to tell Hannibal that it was his curiosity to know what would happen after telling Mason that Hannibal wanted to kill him. In his lose column goes his failed attempt to persuade Hannibal to kill Mason, his expression of all that he’s lost at the hands of Hannibal, and we’ll see how Graham’s attempt to persuade Hannibal to reveal himself to Crawford pans out next week.

We’ve known since the Season opener that there is a physical fight between Hannibal and Crawford in the finale and, however unlikely, it would be easy to assume that Hannibal does reveal himself.

But what drives both Hannibal and Graham in their little game? As twisted as it is, it has to be a mutual curiosity and fascination to know what the other will do next. At the same time it’s admiration and a desire to be the superior intellect.

And that’s essentially what Hannibal’s “Tomewan” was about: finding out who has the upperhand, Graham or Hannibal. Perhaps that will be partially answered next week, but it will likely carry over into Season 3. The rest of this episode essentially serves to lay the foundation for next week and support the Graham/Hannibal story.

Also, as shocking as the forced abortion and hysterectomy was last week, it’s hard to believe that the psychotic minds could outdo themselves in the gore department, but they did. Equal to the visceral gore in this episode were the golden one liners. I hope that I’m not the only one who finds this show funny; it would really say something about the state of my mind if I’m alone here.

This episode dealt with Mason a lot, and as a result he delivered a fair share of those funny lines, as well as being the source of them (“free-range root” anyone?). The writers did a brilliant job of setting up some outrageous facial expressions from Hannibal. Between Hannibal and Graham we learn that Hannibal finds that “Mason is discourteous, and discourtesy is unspeakably ugly” to him. After which, Hannibal has a session with Mason in which Mason puts his feet on Hannibal’s desk and stabs his chair. Hannibal’s dismayed face was priceless. Interesting that the writers drew our attention to the face.

The discourse between Graham and Hannibal as they discuss possible cannibalism and killing has become surprisingly, or not, nonchalant. Just everyday conversation for these two. While we know Graham has ulterior motives for his ease with the subject, he does seem a little too convincing, don’t you think? His empathy seems to be getting the better of him once again (considering what he visualizes when Hannibal has him close his eyes to imagine how he’d like to see Hannibal’s death). But you have to love it when he says, “Mason Verger is a pig and he deserves to be someone’s bacon. Maybe you should kill Mason during your next session.”

The fact that Crawford and Graham are working together to catch Hannibal was carried over from last week. But this week we learned that Crawford is aware that Graham killed Randall and he doesn’t approve, although he’s working to relieve Graham of the legal guilt. Graham also hatches a plan to catch Hannibal, but Crawford, an experienced lawman who’s making tons of liberal choices in this case, wisely has his doubts about the outcome.

Graham’s plan was forced into play when Mason requested Graham’s presence and abducted Hannibal for pig-feeding time. Confronted with the situation, Graham cut Hannibal down instead of taking the easy way and letting Mason feed his pigs with some delicious Hannibal meat. Don’t forget that Graham wants to beat Hannibal at this game of chaos.

It’s odd to think of Hannibal as anything but pure evil, but he does seem to have his tender moments. He appears to actually care for those he persuades to kill, even if he ends up killing them later. And his act to break Mason’s neck just enough to paralyze him so that Margot could still benefit from the family’s wealth shows that he was listening when she expressed the trap she was in after Graham suggested that “Mason can be undone.” It’s a beautiful thing that Margot can now make her faceless and paralyzed brother her plaything. But Mason would be Hannibal’s plaything first. With the help of some drugs that both enchanted and terrified Mason, Hannibal persuaded the pig to cut his face off and feed the strips to Graham’s dogs. Pushing it further, Hannibal told Mason to eat his nose when Mason said he was hungry. The ensuing battle between Graham and Hannibal about who should kill Mason was quite funny, but at the same time it catered to the game between the two. Graham, I think, won this round, citing Hannibal as Mason’s doctor who should do with him what he thinks best, which was to let him live so that Margot could “enjoy” life.

Bringing Dr. Bedelia Du Maurier back to the show was a great surprise. Through her “confession” to Graham we learn a lot more about what happened between her and her patient, Hannibal, which ends up being his MO. What he’s doing to Graham is exactly what he did to her. She also provides a great deal of insight when Graham asks her how she would catch Hannibal: “Hannibal can get lost in self-congratulation, at his own exquisite taste and cunning. Whimsey, that will be how he will get caught.”

-Apparently Mason bacon wasn’t good enough for anybody, just the dogs.
-Mason – “What game of chicken are you and the sperm donor playing?”
-Graham – “Hannibal considers him rude. That’s motive enough. It’s as though committing murders has purged him of lesser rudeness.”
-Du Maurier – “Nothing makes us more vulnerable than loneliness, Agent Crawford… If you think you’re about to catch Hannibal that’s because he wants you to think that.”
Hannibal – “Whomever is pursuing who in this very moment, I intend to eat them.”
-Graham – “What are you feeding my dogs?” Mason – “Just me.”
-Mason – “I’m full of myself.”