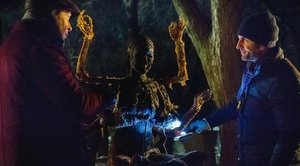 Family, being born, being reborn, and children were important themes in this episode of Hannibal, “Ko No Mono.” First of all, while I was wrong about Graham being reborn as a dyed-in-the-wool killer (thank god), he has/is undergone a rebirth and transformation, made explicitly clear in the opening scene in which he emerges from an amniotic sac. We also returned to Graham’s feelings of paternal love and loss for Abigail Hobbs. And we had Mason’s endless talk about his Papa, his legacy, and breeding.

But most of all this metaphor or symbolism frames the actual baby on board Margot, courtesy of Graham. Graham expresses his conflicted feelings (“I’m so preoccupied with taking a life, I’m having trouble wrapping my head around making one”) to Hannibal, who repeats his conclusion about Graham’s transformation into a killer, “When men become fathers, they undergo biochemical changes that affect the way they think.”

Although it was revealed that Graham didn’t kill Freddie Lounds, he has still tried to kill (Hannibal) and he has killed (Randall), so he’s not entirely the same man he was in Season 1. In fact, he’s far away from that man, and as a result, the pride that we’re seeing in Hannibal is deserved. What is interesting, however, is Crawford’s role in devising this plan to “lure” Hannibal.

We learned last episode that Crawford has doubts (though he wasn’t entirely honest with Hannibal when he told him what those doubts are), but one thing he’s sure of is that he can’t allow Graham to just kill anyone at will — not even Hannibal. Step one in catching Hannibal is putting Graham under Hannibal’s tutelage, allowing him to believe that Graham is transforming. Step two is faking Lounds’ death and Graham telling Hannibal that he felt “euphoric” when he killed her. Finding out what Step three is something to anticipate.

Continuing with the family theme, Graham (despite being an expecting father himself) seems to have two paternal figures: Hannibal, teaching him a trade and passing down a skill (if serial killing can be considered a skill), and Crawford, putting an end to erratic behavior and poor judgment, and enforcing a righteous and moral code.

One of the episodes most disturbing scenes was Mason’s enforced abortion for his sister, Margot. Again, this seems to be a paternal act, or the completion of their actual father’s last will to not give inheritance to Margot. I’d actually like to know more about this man and in what world he imagined the family business and legacy would be in better hands under Mason’s care than Margot’s.

Mason’s behavior, which seems to be torn from Greek Mythology, didn’t end at the abortion; he went a step further to have Margot’s reproductive organs removed, ensuring that she could never “inherit” the Verger business. (As a side, I couldn’t help but notice the red surgical shmocks and masks, which conjured visions of Katharine Isabelle in the Soska sister’s American Mary.)

And let’s not forget that in aborting Margot’s fetus Mason also aborted Graham’s fetus. I’d like to think that any man would do what Graham did, which was to pay a visit to Mason. Unfortunately, that’s all he did. In a just world we’d be permitted the ultimate act of vengeance without consequence, right? But that’s not what happened, despite Mason’s masterfully delivered arrogance and snarkiness (and hilarity), “You must be the baby daddy. Excuse me if I don’t offer you a cigar.”

But Graham did hit him, yay! Then Mason said that he was going to feed Graham to his pigs, but Graham was quick to neutralize the situation by telling Mason that the only thing the three of them (Mason, Margot, and Graham) have in common is the same psychiatrist. In not so many words, Graham makes it clear to Mason that Hannibal has
coordinated this whole situation and makes the strong suggestion that it’s Hannibal who should be fed to the pigs.

Even with Crawford putting the brakes on Graham, preventing him from killing Hannibal directly, the suggestion Graham makes to Mason was the second instance in this episode
where he put the bulls eye on Hannibal. The first time was when Bloom questioned Graham’s intentions; Graham literally put a gun in Bloom’s hand and told her to go to the range and not to be afraid of using it.

-“No, not that one” – as Mason considers life stories to speak of in his therapy session with Hannibal
-Mason literally drinks the tears of children
-Bloom’s outrage at Crawford was epic, saying everything we’ve been thinking of his case up to that point
–Star Wars moment? – “Your design is evolving. Your choices affect the physical structures of your brain”
-It’s a lovely romance between Graham and Hannibal: “…to fuel your radiance, just as the source of light is burning”
-The point about Freddie Lounds’ journalistic integrity was beaten to death — enough already
-“I always thought men were an optional extra in child rearing… I’m not opposed to a male influence, as long as it’s not my brother, he’s not good with children”
-“Hannibal is good enough for you”
-Graham, “What god do you pray to?”; Hannibal, “I don’t pray. I have not bothered by any considerations of deity, other than to recognize how my own modest actions pale beside those of god.”
-Curious, Hannibal’s hyper sense of smell was learned in Season 1, and he was able to smell the carbon residue on Bloom’s hand in this episode, yet he’s unable to smell that Freddie’s body has been substituted.