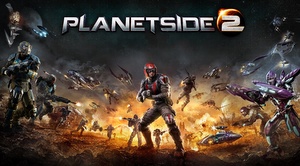 Planetside 2 for PS4 has been delayed at least twice since it was announced at E3 last year. First, the massively multiplayer FPS (MMOFPS) was expected to see the light of day in late 2013, then it was promised for an early 2014 release, and now… well, it’s going to be at E3 2014, and at the MLG Championship Anaheim event that runs from June 20th to 22nd, according to creative director Matt Higby. Higby, via the Comman Center stream on Twitch, didn’t mention the game’s release date.

What is known is that Planetside 2 runs at 1080p on the PS4 and that its status now is to optimize the framerate and user interface as the game makes the leap from PC to console. As Higby stated of the games recent showing at Sony Computer Entertainment America’s HQ:

We were able to demonstrate all that stuff on the PS4 running at a smooth framerate, running at 1080, so we’re very happy with the progress that’s being made on that.

The PS4 version of Planetside 2 will be free-to-play once it’s released.