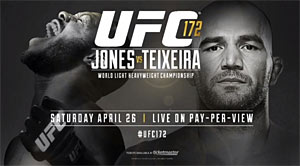 UFC Light Heavyweight Champion Jon Jones steps inside the Octagon this Saturday night to defend the strap against No. 1 contender Glover Texeira at UFC 172. The full fight card is now officially set in stone, and you can check out the lineup right below.

This championship bout between Jones and Teixiera was previously linked as the event headliner at UFC 169, UFC 170, and UFC 171, but due to injuries and slip ups the fight will finally go down in a matter of days at the Baltimore Arena in Baltimore, Maryland. It’s a bout that Chuck Liddell believes will end Jones’ win streak in the stacked light heavyweight division that has some of the best mixed martial artists in the world.

According to Liddell, Jones won’t be “making it to the championship rounds” because Texeira is a terrible matchup for him. However, Jones’ biggest rival Alexander Gustafsson believes that he will pick apart Teixiera once he figures out his range. Based on these two predictions alone, it sounds like it’s going to be an all out war that could go either way. So don’t miss it this weekend because it could end in the blink of an eye.

As for the co-main event, Phil Davis will square off against Anthony Johnson, who recently returned to the UFC after signing a four-fight deal with the organization in February.