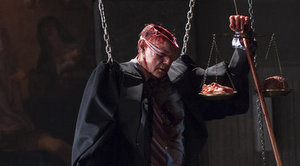 Here we are, Episode 3 of Season 2 on Hannibal and we’re already in the courtroom watching Will Graham’s trial. I honestly expected a couple more episodes before reaching this point. Nonetheless, we’re here, and except for a few details it was a typical, dry courtroom drama.

Among the interesting details was the fact that the episodic theme of Will Graham’s copycat killer has carried over from the previous episode. This is interesting on two points: first, it’s one of the few times on Hannibal that the thematic has crossed over more than one episode. Second, this thematic point has played an important role on the narrative story. That importance being that it provides Graham with a possible defense, other than his current unconsciousness plea. Or, this is what Hannibal would have us and Graham and his lawyer believe. Dr. Bloom isn’t buying it. We haven’t been told directly that Hannibal is behind the copycat killings, but I suspect that he is. I’m not sure anyone else outside the investigation has intimate knowledge of methods used in the crimes Graham is being accused.

If Hannibal is behind the copycat killings, he is truly playing an expert game of chess. From the staging of the victims to the mailing of the ear to the purposely wrong killing method to his belief that Graham, his lawyer, and Crawford would go for the new line of defense to his testimony and predicting that the judge would rule the evidence inadmissible and to his faith that Crawford would come to Graham’s defense while testifying for the prosecution. (Did you see Hannibal’s little devilish grin when Crawford testified?)

Another aspect of Hannibal’s game is his acting, which we saw when he brought Graham the forensic report from the latest copycat killing (the court’s bailiff) to have him profile the scene. When Graham concludes that it’s not the same killer, Hannibal expresses that he would have liked to have been wrong. He plays the sad friend, wanting to regain trust. If Hannibal is the copycat, this act’s purpose is to get Graham to change his defense, even if the evidence implicates that it’s not the same killer as the one Graham is on trial for allegedly being.

The odd thing about Hannibal’s act is that while it has a greater purpose for further weakening Graham’s defense, Hannibal seems actually sincere in wanting Graham’s doubt about him removed. I think that Hannibal does like Graham and respects him as his best adversary, but just as in Mad Max: Beyond Thunderdome, “two men enter, one man leaves.” I’m not sure why the show reintroduced writer/blogger Freddie Lounds, who testified for the prosecution, stating, “she [Abigail Hobbs] believed Will Graham wanted to kill her and cannibalize her like her father wanted to do.” The defense shot her credibility out of the water when it brought up how many times Lounds had been sued for libel. Could she have a more significant role down the road? Will she actually end up coming to Graham’s defense?

Once again, Graham saw Hannibal as the blackfaced demon buck, this time when Hannibal took the witness stand. Did Graham know that Hannibal was going to fail him up there? If so, is Graham playing an even bigger game of chess than Hannibal? Last week we saw Graham acting like he needed Hannibal’s help, so it’s not entirely implausible that he is playing a game of wits with Hannibal. Was shifting defense and having that defense fail a part of Graham’s plan? If so, what does Graham have planned next? Considering the end of the episode, Dr. Bloom is certainly a part of his plan.

Let us know what you think in the comments section below.