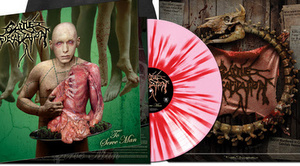 Exciting news from Cattle Decapitation. For some reason, I always find the rerelease of a band’s work on special vinyl issues to be exciting, and Cattle Decapitation are going forward with generous gatefold limited editions of their 10-year discography with Metal Blade Records, calling it the Decade of Decapitation. Extreme metal deserves extreme offers.

Find the details below, including cover artist info and show dates.

San Diego’s finest purveyors of extreme metal, Cattle Decapitation, are planning a series of limited edition vinyl releases for 2014 under the banner “Decade of Decapitation”, to celebrate 10 years of releases on Metal Blade Records. The band’s entire Metal Blade discography: To Serve Man (2002), Humanure (2004), Karma.Bloody.Karma (2006), The Harvest Floor (2009), and Monolith of Inhumanity (2012) are all being prepared in lavish gatefolds for release. The colors, handpicked by the band, reflect the concept or color scheme behind each album.

Fans will also have the opportunity to pick up a collectable box that comes with an exclusive T-shirt, both with brand new art from longtime Cattle Decapitation cover artist, Wes Benscoter.

Additionally, To Serve Man, the band’s debut full-length, and their sophomore effort Humanure have been remastered specially for this release. Each vinyl will be released separately in the coming months. Pre-orders for To Serve Man are available now at: indiemerch.com

We are very excited to announce the ‘Decade of Decapitation’ reissues! All of our Metal Blade discography has been out of print since right after each release and we’re glad we will finally be able to meet some of the demands of the fans with these cool reissues! I’ve had rare items in my personal collection that came with an empty spot for other items that had to be hunted down in order to be complete, I always thought that was fun and so now we pass the hunt on to our fans! The box art is another quality piece from the great Wes Benscoter, which reveals the inside living space of a psychopath hellbent on revenge, the same point of view from which the majority of our lyrics come from.