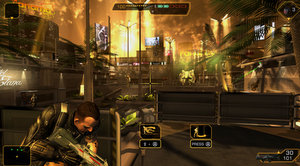 Square Enix is bringing its 2013 mobile game, Deus Ex: The Fall to PC. It will be available on March 25th via Steam for $9.99. Bonus: According to Square Enix’ website, if you preorder now, or for a limited time after release, you’ll also receive a free copy of Deus Ex: Game of the Year Edition. Also, since nobody likes them, you can be excited that the PC version has no microtransactions.

Below you’ll find a feature list for the PC version of Deus Ex: The Fall.

Deus Ex fans can also take joy in the fact that Eidos Montreal is working on the next installment in the franchise, which the developer aims to make into a universe. And, there’s also a movie in the works, which is to be directed by Scott Derrickson (Exorcism).