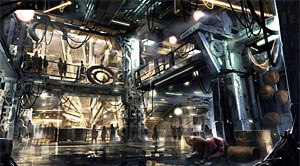 You may have heard way back in October that the next installment in the Deus Ex franchise may be titled Deus Ex: Universe according to David Anfossi, Head of Studio at Eidos Montreal. Today, it appears that the new working title could be Deus Ex: Mankind Divided based on a recent report by Gamespot.

Gamespot just discovered that Square Enix has filed a trademark for that title, which could mean it’s the official title for the new Deus Ex game in development for the Xbox One, PlayStation 4, and Windows PC. Sorry guys, it doesn’t look like it’s going to be released on the Xbox 360 and PS3 anytime soon, or ever actually.

Square Enix hasn’t confirmed or explained what they plan to do with Deus Ex: Mankind Divided yet, but Gamespot is also suggesting that it could be just a mobile game that slots into the Deus Ex universe. A universe that is expected to be an “ongoing, expanding and connected game world built across a generation of core games”, said Anfossi.

We’ll keep you guys updated on Yell! Magazine when more details are revealed. So, stay tuned!