Will There Be A Cheaper Xbox One? 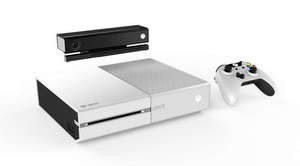 Well, the Xbox One world was rocked with a tidal wave of rumors this week, none of which have been confirmed by Microsoft. At the crest of the rumor wave is the possibility of a cheaper Xbox One coming to market in 2014. The new price point would match PS4‘s at $399 (that’s a $100 drop), but it may come at the cost of the Blu-ray drive being replaced with a Bluetooth adapter. This rumor has been circulating at NeoGAF and at VG247.

Part of the reduced price rumor is that a white Xbox One will be released.

In terms of game rumors, those can be seen below as reported over at GameSpot:

–Halo 5 is coming in 2015
–Halo 2 is getting the Anniversary edition treatment
-One special edition “war” bundle will include ports of Halo 3 and 4 for Xbox One
-beta access to Halo 5 bundled in
-The game will be 1080p
-Same dev and Halo Anniversary edition
-Multiplayer included
–Crackdown 3 is going to be announced at E3, releasing sometime in 2016
–Forza Horizon is coming this fall — 1080p and open-world
–Quantum Break will be a holiday 2014 title
–Sunset Overdrive is coming fall 2014
–Fable Legends is slated for summer 2015
–Fable Anniversary isn’t coming to Xbox One
-The next Gears of War won’t be here for at least another 2.5 years.
–Titanfall DLC coming 45 days then 120 days after release.
-Along with the white Xbox One mentioned below, Microsoft is considering a $399 version without the optical drive.
-Platinum Games has a title coming (codenamed Project Nagano) for March 2016