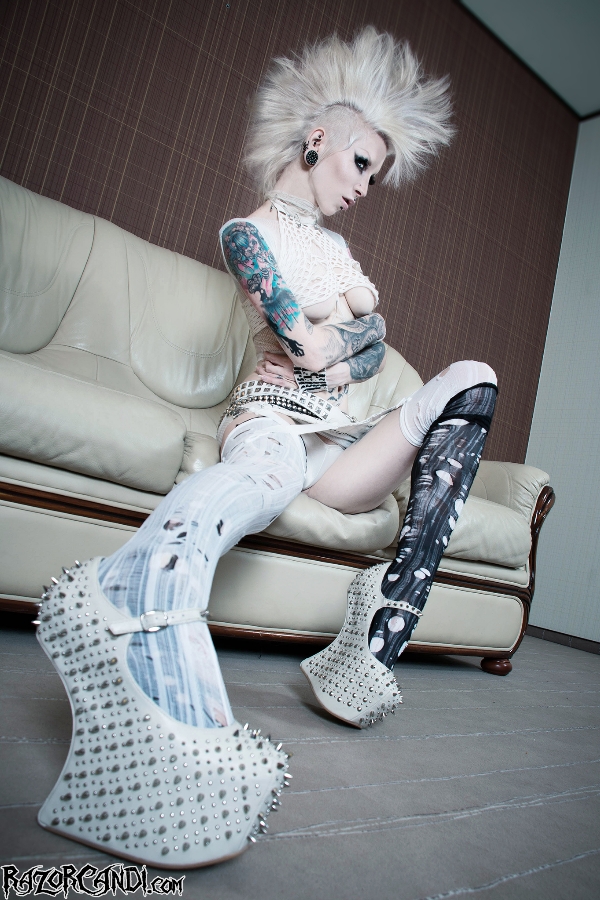 Razor Candi is a beautiful alternative bombshell currently working as an artist, model, and designer out of Transylvania, Romania. She has spent the last 10 years mastering the fetish, tease, goth, and alternative genres. She is famous for wowing her fans with stunning masterpieces that usually feature designs she created. From amazing hair and makeup to stunning props and sets, her charisma and power come out in every set she releases. I was lucky enough to grab a quick interview with her and here’s what she had to say.

A Bit About Razor Candi

First can you tell me a bit about yourself in general, any interesting tidbits people should know about you. How long have you been modeling? Places you have lived and modeled…

My name is Kym, otherwise known as Razor Candi for the past 15 years. I’ve been modeling for 10 years. I am currently residing in Transylvania, Romania, and have been since May 2008. I’ve traveled up and down the East Coast of America for vacationing and for work, for the most part lived in a couple of the East Coast states in the first 25 years of my life, such as Pennsylvania and Florida. I love traveling because each new place I visit tells a story and every person I meet opens a new door.

Visual arts and music are my passions. You will notice that I am profoundly influenced by not only those passions, but also by the many aspects of the various alternative subcultures. Different dress styles aside, I feel what separates me somewhat from the term “model” is that I do all my own styling and makeup and create the majority of the themes and concept designs in my sets. Because of this, you may find that I am more my own art project than that of the photographer’s, although they help capture my essence as I enact my visually intense lifestyle.

Currently my main focus has been my new website, www.RazorCandi.com, which launched in November. The site features beautiful artistic depictions of the eroticism of wild subculture, so if your curiosity has been piqued and you’d like to see more of my photo sets and videos, or just simply an admirer who would like to show support, I welcome you to check it out!

When did you start taking modeling seriously and what was it that made you want to do it?
Around 1999 I discovered my passion for modeling, but only in 2003 did I start taking it more seriously. When I first started, my main focus wasn’t to become anyone, it was simply a leisure pursuit and a way to express myself. I had been posting my images and artwork online since ’99, but in 2003 with Friendster, Myspace, and then Facebook, my work was being widely viewed and only then did I realize it was something to pursue further.

The main goal of modeling for me is to share my images in hopes to broaden others artistic experiences. My true motivation is inspiring people worldwide. Without the knowledge that I encourage self-expression, I would find modeling meaningless and creating new work challenging. Additionally, I wish to introduce my talents to the art world, hopefully proving that my portraits are a suitable way to inspire other artists.

Despite liking to dress up to look attractive for a camera, I mostly enjoy the artistic expression behind it. While modeling has inspired me to make art with my physical features, it is also very emotional for me. I love portraying a feeling through photos, and I am invigorated to know that I can provoke the production of new art and inspire like-minded people.

What drew you into the alternative scene and what inspires you to this day?
My biggest influences were and still are art and music. Visual arts for the physical aspect of what I do and music for the emotions and statements behind who I am. I’ve always been sort of a rebel and always had a hard time conforming to authority and society, so it was pretty natural that I was attracted to rock, punk, and alternative music along with dark art, horror, blood, and gore.

Essentially this made me different than most kids while I was growing up, so naturally I developed an antisocial and very misanthropic attitude which sort of drew me to the alternative lifestyle where my influences only became more profound.

I know this is very vague but naming specific people, bands, or artists would only be part of what exactly influences me since my inspirations cover such a wide range.

What is your favorite era of fashion? Why?
I think my favorite era of fashion was the Victorian age, mainly because I really liked the elegance and fine tailoring in the detail of garments back then, however, I like the glam punk and goth styles which emerged in the ’80s, so maybe a marriage of these two eras.

How would you describe your style? What is your favorite item of clothing?
It’s hard to say exactly how I would describe my style because I display so many different ones so often. Though my style in the past, and even now, has always been a bit DIY with the feel of trash punk meets goth. I’ve really been developing an interest in a more refined [look] but always with the Razor Candi touch, which will always set me aside from standards in the fashion world.

Lately I’ve been developing a taste for latex and other types of fetish gear like posture collars, however, I have to say my favorite item of clothing will always be shoes, I think they make or break an outfit.

What do you consider the worst fashion faux pas?
Well, probably everything I do, haha, but on a personal level what I think is the worst… it has got to be this new trend with the highlighter shades. Of course I am biased because I love black, but really, the florescent shades have got to go!