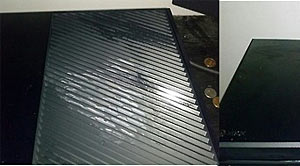 I think Microsoft built a next-gen Frankenstein, and not a next-gen console because some users are reporting that the Xbox One is leaking “some kind of oil.” Could it be blood or is the system really excited about something? Either way, your Xbox One could be alive!

I’m just kidding here since I find it funny that a bizarre hardware issue does indeed exist with the system, but the problem does not appear to be widespread at all, according to GameSpot. Apparently, a number of users have reported that their Xbox One is leaving traces of liquid. In one case, a user said a dried up white residue was discovered on the system (pictured above). However, the problem, which seems to be hardware related, eventually fixed itself.

Microsoft hasn’t commented on this new problem yet, but as soon as the word is out on what it is, we’ll report it right here on Yell! Magazine.