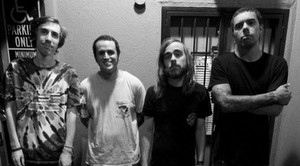 Placed in a genre that boasts such bands as Architects UK, KEN Mode, Tombs, and other post-hardcore bands, California’s State Faults (get it?) are emerging as a band to watch. Today they’ve made available another track from their upcoming album, Resonate/Desperate, due November 12th. You can stream the new track, “Amalgamation,” below.

“Amalgamation” is one of those tracks that are comparable to riding on an emotional roller coaster, and it’s like being bipolar for three and a half minutes. The track weaves beautifully between an aggressive outpouring of rage and intense but melodic retrospection. In the end, it weighs heavy and powerful.

If you like what you hear, pre-order the 11-track Resonate/Desperate at nslp.co/statefaultspo

‘Amalgamation’ was such a fun song to write. It came about very spontaneously during practice one day and we finished it in about 10 or 15 minutes. It was really just us jamming to this groovy drum beat and the rest sort of fell into place. It’s one of my favorite tracks on the record.