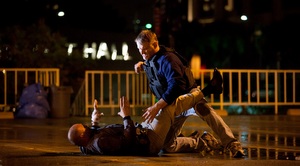 Ambushed reunites two stars from The Expendables (I & II), Dolph Lundgren and Randy Couture, in an action-packed cop thriller that takes place in a city ruled by drugs. Add Vinnie Jones to the mix and you’ve got a must see when the movie comes to Blu-ray/DVD on November 12th.

Ambushed was directed by Giorgio Serafini (The Between), written by Agustin, and comes from the producers of Maximum Conviction, Seal Team Six: The Rain on Osama Bin Laden, and The Devil’s in the Details. OK, that’s a fairly obscure team behind this action flick, but there’s no doubt that a bowl of popcorn won’t last too long against the adrenaline induced by this movie.

Ambushed charts the dark, seductive underbelly of Los Angeles, told from the point of view of two of its seedier denizens, mid-level drug pushers Eddie (Gianni Capaldi) and Frank (Daniel Bonjour). They want a chance to hit the big time. Unfortunately, they decide to achieve their goal by ripping off their middleman in a murderous bid for greatness, setting off a dangerous chain of events involving a ruthless crime boss, a dirty cop, and the Federal agent chasing them all.

Agent Maxwell (Dolph Lundgren) is about to close in on an international cocaine smuggling operation run by criminal mastermind Vincent Camastra (Jones). When Agent Beverly Royce (Carly Pope) goes undercover with the drug dealers, she finds herself in deeper than she can handle. Up against ruthless killers as well as dirty cop Jack Reiley (Randy Couture), Frank, and Eddie will soon find that dreams built on corruption sometimes exact a heavy toll.