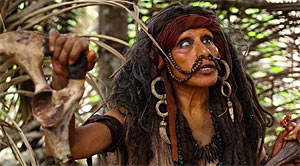 Here we are in September, and October is just around the corner. We all know what that means, don’t we, my little horror bunnies? Movies! Not just any movies, but movies that fall into the genre we are most passionate about… Horror! New horror movies are released throughout the year, but come the fall we are punched in the face with them. That’s OK, man, we dig it! The fall exudes the idea that, somehow, this is just right. You know what I mean?

There are those movies that fall flat on their faces like World War Z did (let’s face it… it pretty much sucked). And then there are those other movies that scare the shit out of people so much that they’re diving for protecting in the arms of a stranger, like what happened in my viewing of The Conjuring (hey, Sweety… call me. Meow). That type of experience is what this list is for. I’m not interested in the PG horror crap. No, I want that, “Oh damn – I think I just pissed myself” type of movie.

I’m only going to cover this two-month span, so You’re Next and the aforementioned The Conjuring get honorable mentions, as does The Purge (which, by the way, was fantastic!). So, let’s get started with this list of 10 Frightful New Horror Movies to Be Released This Fall.

OK, technically Riddick isn’t a horror movie, but it’s sure to scare the shit out of you and get your pulse pounding. As the third film in the Pitch Black franchise directed by David Twohy, there’s no doubt that the thrills and chills are going to be over-the-top. Vin Diesel reprises his role as intergalactic bad-ass Riddick, and once again he’s gotta face off against an alien race and mercenaries, plus a man from his past. Yes, it sounds more like a summer blockbuster, but considering its early September release you can consider it both an end-of-summer and a great kick-off to the fall scare season.

This little gem of anticipation from The Grudge director, Takashi Shimizu, has had several release dates. Unfortunately, there is nothing more concrete than October, so my apologies or something. 7500 is about the one thing that scares the shit out of every human being on the planet… being stuck on an airplane when shit turns bad. Seriously. Where the hell do you go? Not too much is known about the plot of this new horror movie, but essentially passengers are stuck on a plane headed to Japan and some supernatural forces start fucking with their peanut and tiny liquor bottle delivery.

This movie should give warning to all teen moms and expectant mothers anywhere. The couple in Hell Baby decides, for whatever reason, to move to New Orleans… to a home that requires a whole ton of work and is haunted to hell (literally). Their house is cursed and they need an exorcism, but shit starts to hit the fan and bodies start to pile up. Hell Baby is in the vein of The Amityville Horror, but a comedy, and worth a look. It has a good cast which includes Leslie Bibb, Michael Ian Black, and Paul Scheer.

What is creepier than that family on your block that seems so damn perfect? They’re nice to everyone, have a great house, always smiling… such bullshit, right? The Parkers, in this new horror movie, are that family! They’re seemingly very wholesome, albeit a little recluse. Frank, the dad, rules the homestead with an iron fist and fervor unmatched by a Southern Baptist Church in the thralls of the Holy Spirit. His singular purpose is to maintain the customs of his ancestors. A flood in their town leads the local oinkers on a path to discovery that no one could have imagined.

This new horror movie by Eli Roth (sorry, not a fan) is scheduled to be shown at the Toronto International Film Festival (TIFF) this month (September 8th), and then to have a wide (or not so very) release soon after. Roth essentially rips off Cannibal Holocaust (not a fan) in this anticipated flick. Student activists (you know, like Green Peace) make their way down to some South American hell hole to help a tribe that is essentially closing in on extinction. The Green Inferno is Eli Roth with great influence from Cannibal Holocaust… you can fill in the gaps.