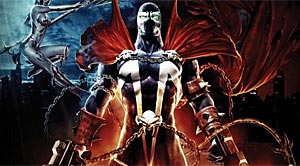 The 1997 Spawn movie is arguably the worst comic book to film adaptation ever, or one of the best depending on your taste. Personally, I thought it was pretty cool because it had an awesome soundtrack and John Leguizamo did a pretty good job as the Violator, Spawn’s most recognizable enemy. At first, It was hard to tell that it was Leguizamo behind all that makeup, but his signature voice broke the barrier, if you paid close attention.

Anyway, if that movie sucked big time for you, then good news is the creator of the series Todd McFarlane has been discussing a new Spawn movie for a while, and has plans to start shooting a new one next year. McFarlane revealed an update during the Canadian Fan Expo 2013 in Toronto via The Gate.

The reality is that I’ve got a lot of pressure. They want me to deliver the script by the end of the year, which would basically mean we’d be shooting next year. So, that’s the goal right now.

McFarlane also talked why production is taken longer then usual, and that it’s going to be more of a horror movie and a thriller movie.

The thing that keeps slowing it down is that the negotiation I’ve done is I write, produce, direct, but I’ve got to push a lot of my other endeavours off to the side so I can just get tunnel vision on it. And so everybody at my company is now going, ‘We’ve got to find Todd the time to finish all this’…

I think it’s a quick shoot. It’s not going to be a giant budget with a lot of special effects, it’s going to be more of a horror movie and a thriller movie, not a superhero one. I’ve got so many people phoning now that I’ve got to get it done. I’ve made some promises to people this year.

Stay tuned on Yell! Magazine for the officially Spawn movie announcement, and for more details when they become available. We’ll make sure to keep you in the loop.