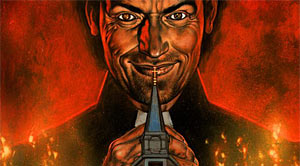 Back in May, Seth Rogan promised next year we’ll see a TV series based on an adaptation of Garth Ennis and Steve Dillon’s comic book series, Preacher. Has that promise been broken since? Oh Hell no it hasn’t been broken! Besides his word and a neat promo art for the show, which Rogan also shared a few months ago, AMC has now finally broken silence.

AMC just announced what Preacher fans have been waiting for all along, a full season order of Preacher based on the twisted and popular ‘90s comic book franchise published by DC Comics’ Vertigo imprint. That’s right! The series is officially picked up with a 10 one-hour episode order and is scheduled to premiere sometime in mid-2016.

Rogen and Evan Goldberg (This Is the End, Superbad) also added,

We started reading the comic when it first came out in the ‘90s. In many ways Garth’s sense of drama and comedy and Steve Dillon’s visual aesthetic helped form our style, and the idea that we are actually bringing ‘Preacher’ to life is a dream come true. This is the craziest thing ever and we can’t wait to move forward and work our asses off to make it the best it can be.

Preacher will be produced by Rogen and Goldberg through their Point Grey banner, along with Neal Moritz’s Original Film. Season regulars will include Dominic Cooper as Jesse Custer (Preacher), Ruth Negga as Tulip, Joseph Gilgun as an Irish vampire named Cassidy, Ian Colletti as Eugene Root aka Arseface, W. Earl Brown as Hugo Root and Lucy Griffiths as Emily.

Expect more news on Preacher to be announced very soon. So stay tuned to Yell! Magazine.