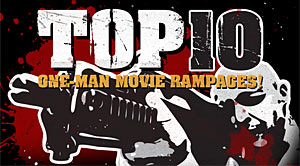 High school sucks. It’s a class warfare centrifuge mixing together the distilled essence of 100 teenage morons, the result of said mix ending up as a cement-hard lump of lifelong resentment and mental problems that no amount of counseling and chemical dependence can ever fix. If only high school were a bit more like Battle Royale, humanity would be a lot better off. Let’s wean out the useless tribe members now before their seed contaminates the gene pool later on.

Tell me one good reason why any of these useless assholes deserves life? JUST ONE!

TOTAL BODY COUNT: THE ENTIRE BURMESE ARMY AND MUCH OF BURMA

If there’s one character on this list that could give classes on how to go on a rampage, John Rambo is your man. Here’s a man whose entire franchise is built around the concept of wiping out a superior force all by his lonesome. Rambo versus a small town! Rambo versus the Vietnamese army! Rambo versus the entire Afghanistan Russian occupation force! Rambo has never met an opposing force he couldn’t one-man.

So when surrounded by what appears to be the entire Burmese military, what’s a disgruntled, traumatized Vietnam veteran to do? Why, hello there, Mr. .50 Cal? How are you today? Shall we exterminate a large number of sinners together?

There’s no problem that can’t be fixed with a little .50 caliber gunfire. A fact my neighbor’s annoying kids were quick to discover last week. What?! They wouldn’t get off my lawn fast enough and they completely ignored my warning shots straight into their dog! Or maybe they were frozen with fear. We’ll never know!

TOTAL BODY COUNT: WHOEVER HAS TO CLEAN UP AFTERWARD

Frank Castle went to John Rambo’s school of one-man rampages and The Punisher’s lifelong crusade against criminals is his ongoing thesis. Here is a man for whom every single day is a rampage. He kills 12 people on his way to the john every morning. He’s maimed more people than every single Justin Bieber album combined. BUT! We’re only interested in cinematic rampages today. While Dolph Lundgren’s attempt to bring Castle to the big screen flopped harder than a fat chick diving into a pool and Thomas Jane’s version was decent but neutered, 2008’s War Zone cranked things all the way to WTF? with its penchant for gory kills.

Castle’s kills are suitably dripping with the red stuff. Castle even takes the time to offer some nice gentleman a place to sit, but the idiot clumsily impales his eyeball on a chair leg. Tsk tsk!

No.2 Chuck Norris: In Real Life

Ahhh, the grand-daddy of all one-man rampages. The standard by which all others are judged. Oft imitated, but never equaled. It’s been the butt of countless jokes, but I dare you to watch this scene without a big, goofy grin on your face. It’s a superbly stupid piece of cinematic warfare. God, I love this movie!

Never step between an Austrian oak and his kidnapped daughter, silly terrorists. What could you possibly have been thinking? Arnold blows up entire buildings using claymores (which, for the record, are anti-personnel mines, not high explosives), he appears to enjoy the benefits of the Infinite Ammo cheat code found in many video games, he kills more people in a single action sequence than many other action stars have in their entire careers, he… he… Look. It’s Commando. Your masculinity suffers every single second you spend not watching this movie. GO RENT IT! THIS I COMMAND!