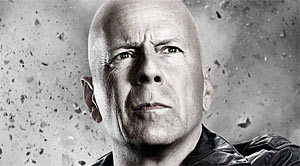 “A million dollars a day” for four days of work is a big chunk of money even for an epic Hollywood movie. In my opinion, 72 hours was far too long to replace Bruce Willis with Harrison Ford in The Expendables 3 based on a source close to the production of the film.

Willis was initially offered a whopping $3 million to star in EX 3, which would require him to fly out to Bulgaria for four days of filming. However, he said he’d drop out of the movie if he didn’t get a million more.

“A million dollars a day. Stallone and everybody else involved said no.”

Stallone then reached out to Ford and sealed a deal with him for EX 3. The source also said,

“I think [Willis] was pretty surprised he was replaced in 72 hours by Harrison Ford — a better actor, a much nicer person and a more interesting direction for the film.”

So there you have it, that’s the main reason why Willis won’t be returning in the explosive blockbuster starring Sylvester Stallone, Jason Statham, Mickey Rourke, and many others.

We also previously reported that MMA superstar and UFC Women’s Bantamweight Champion Ronda Rousey will be in the movie as well.