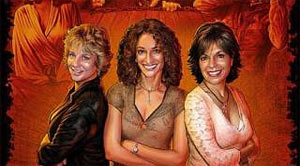 “The Ladies Of The Evil Dead” At The Montreal Horrorfest 2013

The Montreal Horrorfest is a little over a month away, and that hasn’t stopped the crew from adding more horror guests to the lineup, which is already stacked with plenty of familiar faces. We previously reported that Michael Rooker and Laurie Holden from The Walking Dead are invited, including Felicia Day, Jessica Nigri, James Marsters, Mick Foley, and many others.

Now, Evil Dead fans should be stoked to hear that the three fine ladies who starred in the 1981 original will be making a bloody appearance during the annual convention. Theresa Tilly, Betsy Baker, and Ellen Sandweiss are officially invited, and will be more than happy to meet horror fans in the Montreal area, and we know there’s a lot of them around.

The schedule isn’t posted yet on when you can meet them at the Palais des Congrès‎, but when it becomes available later this month, we’ll share it with our readers.