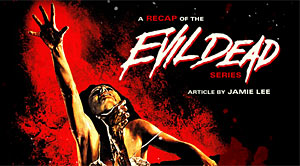 We all know the real reason you clicked on this link: to reminisce about Bruce Campbell’s best one-liners. I hate to disappoint you, but this is going to be an in-depth, philosophical discussion about Sam Raimi’s defining body of works.

Just kidding. Had you going there for a minute, didn’t I?

This article is going to cover the best and worst (if they exist) moments of the cult classic Evil Dead movies. The Evil Dead trilogy paved the way for many modern contemporaries in the “demon possession” horror sub-genre and have remained a mainstay in pop culture, appearing everywhere from video games to big screen releases. There’s talk of a remake on the horizon, but we’ll have more about that later. For now…

A Recap of the Evil Dead Trilogy

After nearly being hit by a semi and falling through a rickety old bridge, you’d think that some people would have the intuition to turn their asses back around, and yet the plot of the first film in the Evil Dead trilogy doesn’t deter five Michigan students traveling on down to the rolling hills of Tennessee to spend a nice, peaceful weekend in a solitary cabin.

We have our sturdy chinned hero, Ashley J. Williams (Bruce Campbell); his weird bitch of a sister, Cheryl (Ellen Sandweiss); Ash’s sweetheart, Linda (Betsy Baker); Scotty (Richard DeManincor), the joker of the group whose jokes aren’t that funny; and Shelly (Theresa Tilly), Scotty’s non-descript, bland girlfriend. The only ones that you’re rooting for from the beginning are Ash and Linda, and even then, Linda is sort of iffy. We all knew from the beginning that Ash would be much more interesting without a girlfriend – but I digress.

Given the cast of characters, it’s naturally Cheryl, the weird and bitchy one, who starts to feel uneasy first, hearing strange chantings of “join us” coming from the forest and undergoing a traumatizing automatic writing experience.

After a bit of exploring in the cellar, the group finds an ancient Sumerian text that alternates between being called the Naturan Demanto and the Necromonicon Ex-Mortis in the Evil Dead trilogy. ((Necromonicon just rolls off the tongue a little better.)

Along with the book, they also find audio tapes that were left behind, containing demonic incantations. What would be the fun in leaving mysterious audio tapes alone? Of course they play them. We’re treated then to dizzying, chaotic shots of a thick, ethereal fog moving through the spooky woods of Tennessee, accompanied by guttural, brainless groans. Yes, you read that right. The forest literally attacks Cheryl, and it’s none too gently implied that the trees have their way with her. She’s naturally shaken up by these events, but it’s debatable if anyone actually cares too much – although Ash does make a valiant attempt to get Cheryl out of the woods, and is thwarted by his car not wanting to start up despite his earlier claims of just having had it tuned up.

Everyone cares a bit more and pays a little more attention when the demons possess Cheryl and she stabs Linda in the foot with a pencil. The pencil-stabbing scene remains one of the most cringe-worthy foot-trauma scenes in any film to date.

Our cast manage to successfully lock Cheryl down in the cellar, though the rickety trap door prevents the saying “out of sight, out of mind” from taking effect. The group starts to lay out ill-fated escape plans amongst the normally occuring tensions when one’s dear friend is possessed and laughing maniacally at you. Soon, Scotty is attacked by Shelly, who in turn dismembers her with an ax.

Scotty, having a surprisingly intense moment of clarity, decides that they need to ditch Linda and go find help somewhere else. Ash does not abide by “bros before hoes” and stays with Linda, sending Scotty off into the woods alone. Luckily for Scotty, he doesn’t get violated by trees – well, at least not in his orifices. He comes back some time later to find that Linda is now also possessed (another good reason to fear pencil-foot penetration) and is suffering a boatload of injuries. Scotty tells Ash that there’s a path to freedom in the woods.

After being taunted and tormented by the deadites, Ash decapitates his girlfriend with a shovel and shoots his sister in the face. Sure, it’s the sort of thing that you joke about when you go on vacation with your friends, but never really expect to happen!

In the meantime, Scotty has died and and returned as a deadite. (I’ve always thought that Deadite Scotty looked like a weird puppy dog. Anyone else?) Scotty now has a bone to pick with Ash, who returns the favor by gouging his best friend’s eyes out. Yet another bloody, gory fight ensues and the Necromonicon is burned in the fireplace, along with Scotty, thus dispelling the demons from Linda and Scotty. Ash’s nightmare looks to be over for about three seconds as he exits the cabin before he’s engulfed in the ominous fog, the ending shot closing with Bruce Campbell screaming in terror.

Read about Evil Dead II: Dead By Dawn as Jamie Lee continues her recap of the Evil Dead trilogy after the jump…