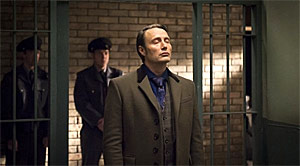 Damn. What an epic first season. Hannibal‘s Season Finale was pretty incredible and a great companion piece to last week’s episode, Relevés. Basically picking up where last week’s episode left off, Graham has completely lost it, and Hannibal is setting him up as a serial killer. Of course we all know that Hannibal is the one who is actually behind the murders, but I have to admit, there were times during this episode that I actually thought Graham was responsible for the murders.

This entire episode was actually only a handful of intense character moments with hardly a moment of actual violence to be found. One thing I have loved about this series is its ability to be intense and brutal in one scene, and then to be calm and contemplative in the next. The show is seemingly a reflection on how Hannibal himself acts. At times he can be insightful, caring, and true to human emotion. At other times he can show himself to be the single most intense hunter I have seen on television in a long time.

During this episode we never actually see Abigail Hobbs die. I wonder to some extent as to whether or not she was actually killed. It seems pretty likely that she is dead, since there was a massive puddle of blood left in her home and her ear was found in Graham’s apartment. To be honest, I sometimes wonder with Graham what is a dream and what is reality. When he was having those weird hallucinations at first I couldn’t distinguish real from fake, but it all seems pretty clear now that Graham is crazy to some extent.

They saw him breaking

Much of “Savoureux” actually dealt with the guilt that characters like Alana Bloom and Jack Crawford feel about Graham’s situation. Both of them could see that Graham was reaching a breaking point, yet neither did anything to actually stop or help him. It’s an interesting burden to carry, and seeing how each person deals with this is interesting.

What’s in store for Season 2?

I must admit I wasn’t quite sure how this season was going to finally end. It was obviously too early in the series for Hannibal to be caught, and it’s not like you can kill off Will Graham, so I was curious as to what kind of big reveal they may have had in store for us. The answer was much more subtle than this.

The last scene really tells you everything you need to know about where this series is heading. I loved the last scene in which Lecter goes to visit Graham in the Baltimore State Hospital for the Criminally Insane. Graham has figured out exactly who set him up, and the question now is, how does he prove it? This will most likely be the subject for season two.

A last scene I want to take a quick look at is when Hannibal shows up at his psychiatrist’s house for dinner. This was an intense scene because earlier in the episode Hannibal had actually cried in front of her. The scene where the two sit down to eat dinner is equally eerie, as his doctor hints that she may know more than she’s letting on about what Hannibal is. I hope to see this relationship develop further next season.

Also, I thought that black figure in Will’s hallucinations was absolutely terrifying. Kudos for the show for legitimately creeping me out.