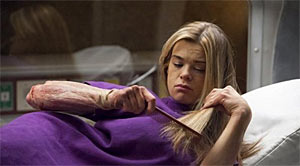 Well, we have arrived at the penultimate Hannibal episode. And things are starting to get tied up. On the one hand, it’s nice that everything is finally starting to come together. On the other hand, I feel like this episode sort of jumped around in a weird way.

“Relevés” picks up pretty much where the 10th episode left off. Georgia Madchen is recovering inside her chamber. She and Graham have a conversation, and then Graham makes a sort of trigger comment to Hannibal, who hands Georgia a comb. The comb ends up leading to a fire (they explain it better than I can) inside her glass recovery chamber and she is burned alive.

Just like it is inside Graham’s head, the episode begins to move at a jumping pace from here on. Graham is starting to figure out Georgia and Dr. Sutcliffe’s murders are connected to the Copy Cat. Even though he isn’t getting closer to Lecter exactly, he is getting closer to something. Abigail Hobbes? Himself? Graham is really starting to question his sanity in this episode even though he claims to be doing better.

Abigail is brought back again and her story seems like it’s getting close to an end. Lecter has an interesting scene with Crawford about Lecter’s questionable methods in treating Graham. He even goes so far as to contact Lecter’s psychiatrist to ask about him. What this means for Crawford and Lecter is yet to be seen. Lecter is capable of taking people out, but to go after someone like Crawford is a pretty slippery slope.

There is just so much going on in this episode that it’s almost pointless to try to explain it all in a single review. Let’s just say that all the character’s are beginning to converge with one another, leading to some great moments, some of which feel like they’ve been cut short. I suppose the show is inhibited by its 42-minute runtime and its 13-episode seasons, but this really felt like a Part 1 sort of episode. Just like a Part 1 type of episode it ended on a fantastic cliffhanger, with one of Hannibal’s most memorable scenes and lines. I don’t want to spoil it, but it gave me some goosebumps.

It’s hard for me to really “review” this episode in a traditional sense. I think once the last episode airs on Thursday, this episode will become a bit easier to read into. I have a few suspicions about where I think the final episode is heading, as I am sure most of you do. One thing is for sure, someone is going to die or go to jail, or both. It will be interesting to see what happens and I personally cannot wait until the finale!