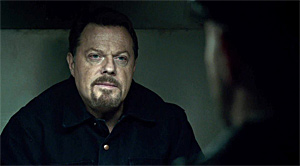 Thursday night’s episode of Hannibal was like a terrifying acid trip. At least from Graham’s perspective. With just three episodes left in the season, including this one, things are really kicking into high gear. For starters, we have Dr. Abel Gideon back in the mix. He makes a pretty cool escape from police custody and starts tracking down all the doctors who messed around in his head. This include Dr. Alana Bloom, and the head of the mental institution Gideon was held at.

It’s a lot of fun watching Eddie Izzard as Gideon. He has a lot of fun in the role and brings a cool, calculated madness to the character. He’s a total badass when he wants to be and calm and collected when he needs to be.

Meanwhile, Graham is not doing so well. His brain inflammation is now causing hardcore hallucinations and even mild seizures. For parts of the episode, you really feel like you’re in Graham’s shoes. He is feeling confused, disoriented, and lost. It’s fantastic how the Hannibal is able to show the madness within Graham using some fun editing tricks and some cool dream sequences, but to also tie things up by the end of the episode.

Lecter and Crawford are continuing to pull on Graham’s brain and it’s pretty much destroying him. Some backward logic from Crawford toward the end of the episode reinforces the fact that he is willing to take the risk on Graham, no matter what the potential consequences. Its hard to say what exactly Lecter’s angle is. I still don’t get exactly why he never told Graham about the MRI results, or what he was trying to accomplish by not telling Graham. I guess its the whole mind over matter concept. If you don’t believe something is wrong, then the problem may fix itself. [Editor’s note: This was the second episode in which they mentioned “psychological pushing” as an unethical practice. It’s likely that Lecter is psychologically pushing Graham, but toward what remains a mystery.]

I am not sure how much more Graham can take of this stress. The series is actually reminding me of the sort of psychosis state that Claire Danes’ character goes through in the show Homeland. I wouldn’t be at all surprised if he goes through a similar treatment as Danes did. This episode wasn’t really about big reveals, but more about the setting up of the big reveals. Abigail is sure to come back sometime in the next two episodes, and now that Hannibal has been renewed, the writers may have better ideas of where to take the show.

Speaking of taking the show places, this could be the most directly violent episodes so far. When Dr. Gideon goes to work on one of his victims, they don’t exactly dance around it. You will see some organs removed and a good amount of blood. This is probably what’s really keeping Hannibal from reaching a wider audience. It’s incredibly dark, especially for something on NBC; the show occasionally reaches the same gory heights as a show like Dexter, and it’s definitely cringe-worthy.

On a last note, one pairing I always love to watch is Hannibal with his own psychiatrist. Not only does it give depth to Hannibal’s character, but it also just gives us more context on him, his ideals, and his weaknesses. It’s also fun to watch his psychiatrist because she keeps Hannibal on his toes. The same way he keeps her on her’s. In the grand scheme of people Hannibal seems to like, she must rank somewhere near the top.

There isn’t much else to say about this particular episode. It didn’t exactly have any major revelations but it served as the ultimate, straw that broke the camel’s back, type of episode. Just two episodes left, and I for one cannot wait to see how this season concludes!