The Wolverine – Jackman’s Last Go With The Character? 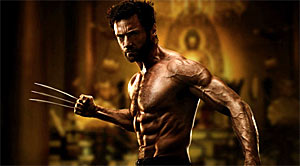 The Wolverine (directed by James Mangold) opens July 26, 2013, and while this is Hugh Jackman‘s sixth turn as the titular character, it could be among his last, aside from his appearance in X-Men: Days Of Future Past (slated for July 18, 2014, and directed by Bryan Singer).

In a recent interview with Entertainment Weekly, Jackman said:

“I wasn’t even sure after the first film if I would do another. I won’t say never, because I’m still loving it. But there would have to be a pretty compelling reason.”

My understanding, then, is that Jackman would want a big fat paycheck. Considering that Jackman is the face of Logan, that paycheck may land in his pocket for the potential Wolverine appearance in The Avengers 2 (directed by Joss Whedon).

Wolverine makes a voyage to modern-day Japan, where he encounters an enemy from his past that will impact on his future.