Pucifer’s “All Re-Mixed Up” Gets A Street Date 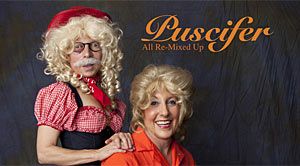 Puscifer have set an August 27th street date for All Re-Mixed Up, a track-for-track remix album of the band’s sophomore release, Conditions of My Parole.

“All Re-Mixed Up is the continuation of the Puscifer tradition to release alternate versions, reworks, and remixes of what we consider initial thoughts. For instance, Carina Round was nervous about how to approach her version of ‘Telling Ghosts.’ Mat Mitchell put her at ease by asking her to think of it as a song half written, advising her to ‘now write the other half.’ It’s extremely liberating in the digital age to approach composing and creating in this manner. Infinite paths to explore, reinterpret, and re-present.”

I get what Maynard’s goal is, and I can even see the appeal to it, but is it just lazy? Especially since Pucifer just released the Donkey Punch The Night EP, which is a bunch of covers – great covers, but covers nonetheless. Pucifer also recently performed at Coachella, Australia’s Soundwave Festival, and Lollapalooz Brazil and Chile. To me, releasing a remix album at this point sounds like, “OK, we’re on a roll, let’s keep it going; what can we do that we can put out real quick?”

All Re-Mixed Up track listing and remixers: