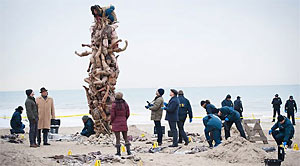 Finally! Abigail Hobbs is back. Along with another awesome serial killer of the week. Three words, human totem pole. Yes, some are calling it “unrealistic,” but I for one thought it was pretty damn awesome. I mean let’s face it, the plausibility of the show as a whole is pretty inconsistent. So I say, just role with it. This week on Hannibal we find Graham and Crawford investigating a pretty demented killer. He erects a giant totem pole of human body parts ranging from fresh corpses to nearly 20-year-old corpses.

This episode had a lot of the fun elements that just make me enjoy this show week after week. It included a dinner party, the cunning Freddie Lounds returns, Abigail is finally back in the mix, and we got some pretty sharp and witty dialogue. All in all, this feels like the episode that solidifies Hannibal as one of the best new shows of the season.

Since I generally watch each episode with my mother, I want to bring up something that she found annoying about the show. The fact that they catch a new serial killer every week. I must admit, this has been gnawing at me for the past couple episodes since they do catch a killer every single episode. I had been kind of waiting for a major killer to come along to truly stump Graham, but alas this hasn’t happened yet. Of course we have Hannibal, but I think we all know it’s a bit too early for Graham to really start looking into him.

What I am starting to think more and more, is that Abigail will end up playing a bigger role. She has been consistently interesting throughout the season, and while I took her absence as something of let down, it was great to see her fully integrated back into the mix. She, of course, knows what Hannibal is, and it seems as though Hannibal, at the very least, feels some responsibility toward her. He says that he cares about her but then again, who knows what that really means coming from Hannibal.

I don’t want to go too deeply into Abigail’s story this week, but certain elements definitely point to the fact that she is here to stay, at least for now.

Now, when it comes to Hannibal caring about people, I think Will is the one he truly feels some connection to. On one hand, the two are natural foes, on the other, they seem to have a shared connection in loneliness. Both feel isolated from the world, different. While some may say that Hannibal could kill Will at any time, I think there is a certain respect or admiration that keeps Hannibal from seeing Will as a target, at least until Graham starts to suspect him, then who knows what will happen.

Much of this is speculation, however, so back to the episode at hand.

Abigail turns to Freddie Lounds to finally tell her version of what happened. Of course Will and Hannibal think this is a pretty bad idea, but a few nicely handled scenes really work the issue out, while also setting up a new story line.

Also, I haven’t really talked about her much, but Dr. Alana Bloom has been showing up more frequently. We now know her and Graham have something going on and even though it’s only been scratched upon, it feels like this will be a much more important element in episodes to come. Also, now with Graham completely falling off the deep end, I think Dr. Bloom is going to be incredibly important in helping Graham get back together.

On a last side note, one particular scene I loved in this episode was Graham’s lecture. Very well done!