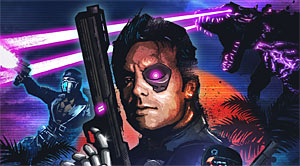 I just happen to finishes Far Cry 3: Blood Dragon, and I must say Ubisoft did a splendid job ripping off all my favorite sci-fi classics from the ’80s. The Terminator, Aliens, Predator, The Wraith and RoboCop all appear in Blood Dragon in some shape or form, and I loved it.

At first, I really thought this game was just going to be a skin job, and boy was I damn wrong. I got to experience a completely new kick ass story for under 15$, and hands down is hell of a bargain for what you get. I’m so convinced that I enjoyed Blood Dragon more than Far Cry 3 that I’m already looking forward to a sequel. Hats off to creative director Dead Evans for going out of his way in crafting a bizarre project like this, and I really hope the game is successful enough for Ubisoft to make a sequel, or even a prequel would blow my mind away.

According to a few sources, Evans is pushing for a Blood Dragon II, and Dread Central recently released part of an interview they did with Michael Biehn, who also weighed in on matter since he stars in the game as Sergeant Rex ‘Power’ Colt.

Personally, I’m already sensing Blood Dragon is a hit because I enjoyed every minute of it, and all the nerds like myself are talking about this game. So Ubisoft, if you’re listening, please make a sequel very soon.