Was Sam Raimi Really Talking About Army of Darkness 2? 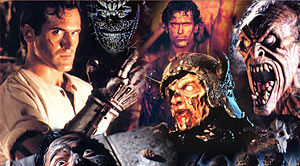 Wait a second here, Sam Raimi’s producing partner Rob Tapert from Ghost House Pictures just revealed another important piece of the puzzle in the Evil Dead franchise. Last week we reported that Sam Raimi and his brother, Ivan, are planning to write the script for another Evil Dead sequel, which was assumed to be officially called Evil Dead 4. Well, according to Shock Till You Drop, Tapert clarified that they were really talking about a direct sequel to Army of Darkness.

In all honesty, Army of Darkness 2 makes more sense to me now because the last installment wasn’t even really marketed as Evil Dead 3, and it was slightly connected with Evil Dead 2. Calling the next film Evil Dead 4 would also be in conflict with the new remake by Fede Alvarez, who also confirmed last week a sequel to his take in the franchise.

Additionally, Bruce Campbell gave his thoughts about returning as Ash Williams, and what he thinks about a fourth installment during a Q&A for the new remake on Saturday night.

“Sam threatens this every six months, I’ve heard this a thousand times, because in the back of his mind, he never wants to let go, because he loved making these movies. We all loved making them together. They were a nightmare to make, very difficult, but they lasted the test of time, so he’s not going to let that go, and I’m never going to say ‘no.’ It’ll be me and a walker fighting some other old guy. But that’s what he does and who knows? It may happen.”

What do you think now? Should the next installment be called Evil Dead 4 or Army of Darkness 2? Leave your opinion in the comments section below.