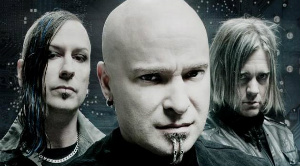 David Draiman has a new band. It’s called Device, and their debut album gets released next month. Device’s lead single, “Vilify,” hits radio airwaves tomorrow, but it leaked on the Internet today… and it sucks hairy balls.

Sure, Device is being touted as an Industrial Metal band, so the sound is a little different than that of Disturbed’s, but Draiman is so one-dimensional as a vocalist that he can’t help but deliver the same, tired vocal stylings. “Vilify” is an utter bore and I couldn’t be bothered.

So why write about it?

Because Draiman is one of those public figures I can’t stand, and when an opportunity to talk shit about him arises, I might as well take it. Nothing personal if you’re a Disturbed fan.

Draiman must have known that Device was going to suck hairy balls; nothing else could explain why he called in an army of more talented people to help with this project. The following people should be ashamed for taking part in this project: Black Sabbath’s Geezer Butler, System of a Down’s Serj Tankian, Avenged Sevenfold’s M. Shadows, and Halestorm’s Lzzy.