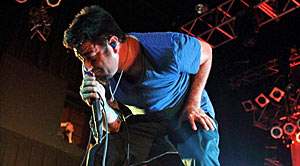 Palms, the Los Angeles-based quartet that features Jeff Caxide, Aaron Harris, and Bryant Clifford Meyer from Isis, and Chino Moreno of the Deftones, will release their self-titled debut album on June 25th, via Ipecac Recordings.

An audio clip of an early, unmastered mix of the song “Tropics” was recently played by Moreno on his online Mixlr broadcast and went viral shortly thereafter (the video clip has since gone dark).

Palms was recorded and mixed by Aaron Harris and produced by Palms. The band recently put up a splash page at Palmsband.com.