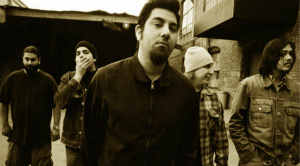 We at Yell! Magazine have had the privilege of seeing the Deftones live a few times at various festival settings, most recently at the Amnesia Rockfest in Montebello, Quebec. I have to say that each time I see them I’m impressed with their performance: it’s always tight, it’s always moving, it’s always professional, and it always connects with fans. I imagine that’s because Deftones fans are loyal and truly love the band — and females love Chino Moreno.

The Deftones formed in 1988, when founding members Stephen Carpenter, Abe Cunningham, and Chino Moreno were teenagers, active on the Sacramento skate scene. The band didn’t release their debut album, Adrenaline, until 1995. They were a very welcome addition to a pretty shitty mid-’90s scene, even if some of their sound resembled what was commercially popular at the time. However, there were elements that hinted at something with longevity, such as obvious influence from Faith No More and Rage Against the Machine (to my ears, at least).

This 2009 Deftones performance from Area4 captures so well the intense and ethereal qualities of the band. It is nothing short of being near perfect, and it represents what you can expect anytime you see the Deftones live.