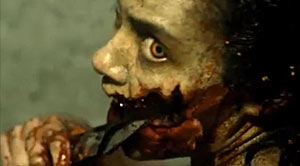 If you watched the red band trailer for the Evil Dead remake, then you are aware of how gory and bloody it is compared to the classic. With that in mind, I’m sure some of you have doubts if we will see the Fede Alvarez’s cut on the big screen.

Well, according to a recent report, the inevitable news was announced and Evil Dead scored an NC-17 rating from the MPAA. With a rating like that, there’s no chance in hell we will see the director’s version in the theaters, but most likely on Blu-ray and DVD.

The film is now headed for the chopping block to get the rating lowered to an R, however, Alvarez reassured his fans on Twitter that even with the inevitable cuts that “all the stuff” seen in the trailers will still be there.

The R rated will have ALL the stuff you are seeing in the trailers. Trust me, You haven't seen a harder R rated film than ours…

That’s still great news in my opinion, and like the director said, Evil Dead is most likely going to be hardest R-rated film to come from a studio picture this year. But I’m still curious to see if it will blow the lid off on Hatchet 2, since it was the first film released unrated in mainstream theaters across the U.S. in over 32 years.

Let’s just hope it will.