New Stills And Video Clip From Stoker, A Psychological Thriller By Park Chan-Wook 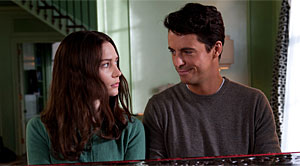 Stoker is Park Chan-Wook’s English-language film debut, and it premiered this weekend at the Sundance Film Festival in Park City, Utah, among other horror films such as, S-VHS and In Fear.

Since we didn’t get a chance to attend the first screening and bring you a review, we decided to drop the above picture gallery and the first video clip (below), to help shed some light on Stoker, a film influenced by Bram Stoker’s Dracula and described as a Hitchcockian thriller. However, the film is “not about vampires,” although we think that could have been cool.

The Korean director is known for his revenge trilogy, which includes the ultra-violent Oldboy, and he favored directing Stoker, screenplay by Prison Break star Wentworth Miller, over Tinker, Tailor, Soldier Spy and The Evil Dead remake. Apparently, Miller’s script was voted to the 2010 “Black List” of the 10 best unproduced screenplays making the rounds in Hollywood.

After India’s father dies in an auto accident, her Uncle Charlie, whom she never knew existed, comes to live with her and her emotionally unstable mother, Evelyn. Soon after his arrival, India begins to suspect this mysterious, charming man has disturbing ulterior motives, but instead of feeling outrage or horror, the friendless girl becomes increasingly infatuated with him.

Stoker is currently slated for a limited theater release on March 1. It was produced by Ridley Scott and stars Mia Wasikowska, Nicole Kidman, and Matthew Goode.