Will Witcher 3 Be Officially Announced By CD Projekt Red Soon? 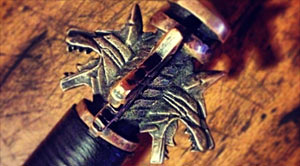 Fans of The Witcher video game series need to rejoice today because a mysterious announcement is coming your way on February 5 from the developers. If you aren’t aware that rumors exist on another installment in the series, well CD Projekt Red just added fuel to the fire by revealing a new image on their website that depicts the hilt of Geralt’s sword, and you undoubtedly know this is the protagonist of The Witcher series.

“If you are wondering what’s that in that picture above – well, we’ll leave it for your imagination to answer.”

According to Gamespot, a secret message also appeared last week in the Cyberpunk 2077 trailer that hinted at Witcher 3, which briefly spoke about a “fully open-world game with an intense story.” Apparently the message appeared at the end of the trailer and was deciphered by Reddit users.

So, in less than three weeks, CD Projekt Red will shed light on their upcoming title, which will most likely be Witcher 3.