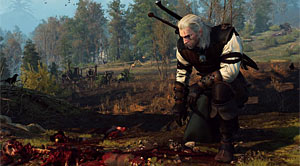 The Witcher 3: Wild Hunt is still pretty glitchy for Windows PC, and CD Projekt Red is hoping to fix bugs for most players in a new major update, which rolled out earlier today. The newest PC patch, version 1.04, will improve the texture rendering quality and fix various bugs (full patch notes right below).

For those running the RPG game on the Xbox One and PlayStation 4, expect a patch to come this week at the earliest, which will address frame rate issues and more.

– Rebinding of all keys is now available after switching on the ‘Unlock Bindings’ option in the Options\Key Bindings submenu.
– Corrects an issue in the dialogue system that might have caused dialogue looping in certain scenes.
– Fixes an issue with incorrect behavior of Wild Hunt warriors after they were affected by the Axii Sign.
– Corrects a bug that caused spontaneous combustion of gas clouds.
– 1280 x 720 resolution is now properly displayed as a valid resolution option.
– Fixes boat stuttering in cutscenes.
– Texture rendering quality for the high and ultra presets has been improved.
– Further improvements made in Nvidia Hairworks performance.
– A few additional gwent cards are now available in the Prologue area.
– Fixes an issue where users with usernames incorporating non-Latin characters were unable to import saves from The Witcher 2.
– Includes a series of overall stability and performance improvements.
– Fixes issues related to alt + tabbing and minimizing the game window.
– Updates the game icon.
– Enlarges the loot pop-up window in the UI.
– Fixes an issue where, in certain circumstances, the comparison window could extend beyond the game borders in the UI.
– Upgrading items included in gear sets no longer destroys rune sockets on said items.
– Introduces small tweaks in the UI for gwent.
– Corrects some missing translations in localized versions.