Behind-The-Scenes Look At The Remake Of Evil Dead [PICS] 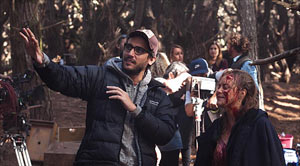 The two gory-ass red band trailers released so far for the Evil Dead remake gave us a bloody taste at what Director Fede Alvarez has done to the franchise that we all hold so close to our hearts. The big question I’m asking myself now is: Will this remake be as good as the original?

At first, when the news broke about a remake, I honestly wasn’t in favor of it because we all know that remakes normally suck. Although some of them have exceeded expectations, such as The Hills Have Eyes, Silent Night, and Dawn of the Dead by Zack Snyder. These are remakes that were directed by great directors, and I foresee that Alvarez can hold onto the same torch as they did, in terms of making another good remake that will appeal to old fans like myself. Sorry newbs, I grew up watching horror movies when practical FX was the shit, and artists like Tom Savini conquered the world. Wait a minute, you might not even know who the hell he is, if that’s the case then I’ll use Greg Nicotero as reference since you probably watch The Walking Dead. Right?

The fact is that Fede Alvarez stated in a recent interview that they didn’t use any CGI in the Evil Dead remake, and that, my friends, pretty much tells me that this guy has a solid lust for blood – just like Jason Voorhees. Sure, that still doesn’t tell us if the movie will be any good or even on par with the original, but we need to get positive hope from something.

So far, I really like the direction Alvarez has taken with the franchise, based on the trailers, and I can’t wait to see it on the silver screen come April 12, 2013.

In the meantime, enjoy these two behind-the-scenes photos from the set of Evil Dead.