Metal Down Under – The Definitive Aussi Metal Documentary 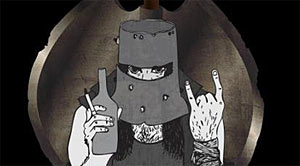 We’re all familiar with the likes of AC/DC and Airbourne, and some of us might even know such bands as Rose Tattoo, The Angels, and Damaged, but how much does the majority of us know about the heavy metal scene in Australia?

If you’ve ever wondered about Australian metal, then you’ll be pleased to know that Nick Calpakdjian and David Hawkins are putting together a film that documents the history of metal in Australia. According to the press release, Metal Down Under will discuss the significance and influence of such bands as Psycroptic, Pegazus, Psychonaut, Allegiance, Slaughter Lord, and Blood Duster

An interactive website is also being released in conjunction with Metal Down Under. You can visit www.metaldownunder.com now, and that’s going to have to do for now as the documentary is currently being filmed and an official release date hasn’t been announced yet.

Check out the rest of the Metal Down Under press release below, and as always…

Animus Industries is producing a feature-length documentary about the history of heavy metal music in Australia. The film will trace the origins of metal in Australia and explore this ever-evolving genre of extreme music. From grindcore, thrash, death metal, black metal, hardcore, doom, melodic metal, sludge, power metal, and the many more sub genres that exist, Metal Down Under will cover it all.

The history of metal in Australia has never been fully told and this film attempts to rectify that. Rather than a backstage interview film with a bit of live footage in between, Metal Down Under will tell the story of Aussie metal through formal interviews, archival, animation, candid observation-style footage and first-person narration. The film will be accompanied by an interactive website that will document the production of the film as well as profile and publicize many of the bands and identities involved in heavy metal. Released in conjunction with the documentary DVD will be a bonus DVD of music videos, interviews, and extended material, as well as a compilation CD.