Human Centipede 3 Is Back On 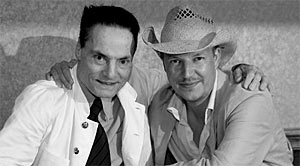 That’s right! After director Tom Six and actor Dieter Laser had a falling out of sorts last year, the whole Human Centipede empire was seemingly destined for the biological waste depot. Now, however, the two men have bygones be excrement and have moved on toward the completion of Final Sequence.

“I know my Human Centipede III will be very politically incorrect, but I didn’t want to change anything in the script. I am very happy Dieter will follow my vision for a full 100% now and know he is absolutely the most brilliant actor I could wish for.”

Sorry. Did anyone ever expect a politically correct Human Centipede? Oh, you in the back there did. Ok, my bad. I thought things were pretty much “anything goes” after that dude shit in that girls mouth in the first film. Beating off the “politically correct monster” with a stick, Six is promising a 500-plus person centipede for the upcoming Human Centipede III: Final Sequence.

“I never ever would have thought that all our differences and misunderstandings would in the end lead to an even deeper and warmer understanding and appreciation of each other. In this regard I am actually thankful about the whole fuss because it turned out to be an advantage and a wonderful present for our film and for our friendship.”