Eric Roberts Signs Up For The Human Centipede 3 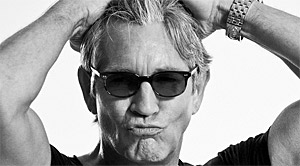 Eric Roberts Signs Up For The Human Centipede 3

Tom Six finally got the ball rolling last week with his third and final installment in The Human Centipede saga, and like he previously said, a “big American celebrity” will appear in it. Whether or not Six was being sarcastic when he made the announcement, that big-time American celebrity is now reported to be Oscar-nominated actor Eric Roberts.

He will be joining Laurence R. Harvey and Dieter Laser in the upcoming horror film, along with Tommy “Tiny” Lister (Friday), Robert LaSardo (Death Race), Bree Olson, and Tom Six will also make an appearance.

A 13-day shoot is currently taking place inside a prison until June 6th, and it appears that the film will feature a “500 human centipede” made up of inmates.

No word yet on the official release date.