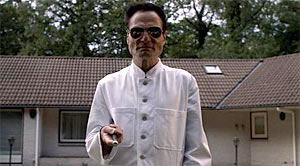 Earlier this week, we reported that Tom Six is finally getting ready to start filming The Human Centipede 3 (Final Sequence) in the Monterey Park area of Los Angeles, according to a permit filed with FilmL.A. Inc.

Now, thanks to a recent casting call notice (contains spoilers), new details on the final installment have surfaced that suggest the last piece of The Human Cenpitede saga may take place in a prison. In the notice below, men of all ages, sizes, and ethnicities are to play inmates in the film for a 13-day shoot in an actual prison.

Additionally, the actors chosen to take part in the final scene of the shoot are required to be comfortable in dropping down to their hands in knees to do the glamorous “human centipede” pose.

Human Centipede 3, a horror film, is looking for gentlemen of all ages, sizes, and ethnicities to play prison inmates starting Thursday – May 16 in Los Angeles. These prisoners will work up to 13 days between May 16 and June 6. We will be shooting at a number of actual prisons in the L.A. area. Applicants can be expected to engage in regular prisoner activities like rioting, screaming, and fighting. However, this is a Human Centipede movie. THERE WILL BE SOME SCENES TOWARDS THE END OF THE SHOOT REQUIRING PRISONERS TO BE PART OF THE HUMAN CENTIPEDE. Actors will be fully clothed, but will be asked to pose on their hands and knees, rear end to mouth. Please do not apply if uncomfortable with this process.

Lastly, reports also suggest that actors Dieter Laser and Lawrence R. Harvey are returning to the franchise, but will play completely new villains.

The Human Centipede 3 is currently scheduled for a 2014 release through IFC films with no specific date set yet.