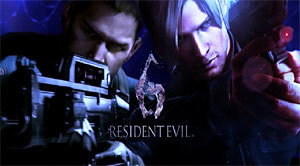 Here is a date to remember that I wasn’t expecting to be revealed anytime soon, as Capcom officially announced today the release date for Resident Evil 6 on the PC. While the console versions have been out since October, and some additional content is already available for download. It appears that all of them including future content will be launched with the PC version on March 22, 2013. Computer junkies should be pleased with this announcement because not too long Capcom said that RE6 wouldn’t come available anytime soon for the PC, as they promised not to make the same mistakes as RE4.

Additionally to this news, Resident Evil 6 has a new title update for the PS3 and Xbox 360 today, which unlocks Ada Wong’s campaign with co-op partner support. The update also adds No Hope difficulty to the game, and new camera-adjustment options to play around with. Capcom also confirmed another RE6 update is coming on January 22, 2013 that will turn on the Agent Hunt mode from the start.

The last piece of reminder not to forget is that three new multiplayer modes (Predator, Onslaught, and Survivor) for Resident Evil 6 is being released tomorrow on the Xbox 360 for a bundled price of $9, or for $4 individually via Xbox LIVE.