Will Resident Evil 6 Become The Best-Selling Title For Capcom? 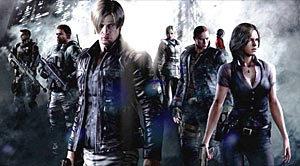 Resident Evil 6 hit store shelves on October 2, and I’m just wondering if some of you already own a copy of RE6?

Just asking because Capcom recently announced that it has shipped over 4.5 million copies worldwide since the game’s release. This figure is a record-breaker for any title in Capcom’s roster to this date. Also, according to the sales records of Capcom, the Resident Evil series has increased to over 50 million copies worldwide since the launch of the franchise in 1996. While the first reviews for RE6 aren’t as positive as Resident Evil 4, which is a fan favorite, Capcom insists that RE6 will be the publisher’s best-selling title.

If you disagree with Capcom’s statement, we would love to hear your thoughts about RE6 in the comment section below.