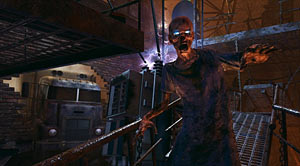 Treyarch has recently released new gameplay footage for COD: Black Ops 2 Zombies that features the new map titled TranZit which, is an expansive world that takes place after the destruction of earth.

TranZit will offer players to explore five locations within the world that also promises to elevate in difficulty as you cross them. Included as a destination point in TranZit is a bus stop, diner, farm, an industrial type of area, and a town. Another slick new feature added to TranZit is “Buildables” that will bring zombie mode one notch closer to a true survival experience as you can now build objects from individual items in the world such as a zombie shield that appears to offer the best coverage in comparison to the powerful rifles, and classic shotguns.

If you still haven’t seen any gameplay footage for Black Ops 2 Zombies, check this one out now as we plan to bring you more updates on Zombies until the official release of the FPS on November 13, 2012.