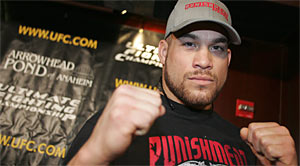 Finally, in a middleweight showdown which has captured the imagination, Michael “the Count” Bisping will swop leather with the devastating striker “All-American” Brian Stann.

Chael Sonnen has shared the Octagon with both men in the last 11months, so has great insight into the eagerly-awaited middleweight clash.

The “American Gangster” said: “This is a main event fight anywhere in the world; let me start by saying that. This is a A-list main event on any card anywhere. And secondly, this is a fight that Bisping isn’t used to. Brian Stann is not afraid to strike with him and has a lot more power than Michael has. You don’t have to be an avid fan to realize the fact Stann hits a lot harder than Bisping.

“And that isn’t a knock on Mike. He hits plenty hard. He hurt me bad in our first round with a right hand and I looked at him thinking ‘You have no idea how bad you just hurt me’. And Dan Henderson called me up the day before I fought Mike and said ‘Don’t believe the stuff about Bisping not being able to punch – he hits hard’.

“And he does – but Stann buzzed me with the draft of one of his shots and is a completely different animal. Brian Stann – uniquely I think in the UFC – can knock any middleweight or light heavyweight out with one shot.

“But I love the fight. Stann is not afraid to get hit and Bisping will certainly hit him. Bisping is very hard to land on and he’s very wiry, so I expect Mike to have some success early. Neither guy is going to have to worry about a fast pace because they are always in shape and they both are going to go after it.

“But I come back to this: Stann is a plant your feet and throw bombs kinda guy. And I think 15minutes is a long time for Bisping to avoid those bombs. I’m not one of those guys who is going to say ‘Bisping should win – but IF Stann lands it is over’. I am the guy saying ‘Stann WILL land a bomb and he will win this fight by KO’. He will find the shot 100%”