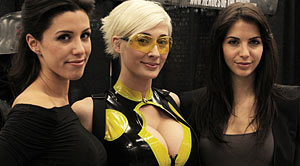 Friday evening we visited the opening night of the Montreal ComicCon 2012, which is among the top Comic-Cons in existence, and growing. It was pretty tame since it was clear that people were holding out for the full days of geekdom on Saturday and Sunday. There were, however, enough characters out in full cosplay regalia to give us a nice teasing and and a nerd boner for what was to come. Man, steampunk girls with overflowing cleavages are tops. Well, we can’t complain about Spider-Man chicks in latex either.

But hot chicks in cosplay wasn’t the only reason for our going to the Montreal ComicCon. The dudes came out to play as well. OK, that’s not as exciting, so our attention also turned to well, comic books, namely Crossed (you’ll want to wash with steel wool after reading this), Clive Barker‘s latest, and The Walking Dead. There was a lot more, but come on; did you really expect us to list them all? As you can imagine, the zombie cosplayers were among some of the best, though there were no original takes on the monster.

Naturally, there were a number of celebrities in attendance (like Gunnar Hansen, there), and this year’s main attraction was William Shatner. Though we didn’t get any alone time with him, we did manage to pick the brains of a few talents in attendance. Stay tuned for our video interviews coming to your computer screen shortly. Here are a couple of hints: one of our interviewees is a B-movie legend (director, producer, writer, and actor), and another is an FX legend and occasional actor.