Montreal Comiccon 2015: 5 Of The Coolest Things We Saw 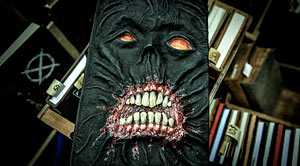 Any right and just comic-con has to have comic book vendors, and plenty of them. The Montreal Comiccon has always done well in that regard. However, Montreal being a gaming industry hub, you’re always going to find plenty of video game stuff from Ubisoft and the like. Then, of course, there’s the usual hordes of cosplayers and gaggles of fans waiting for celebrity signings and photo ops, adoring fans hanging on every word at a celebrity Q&A, trading cards and action figures, t-shirts and more apparel, and let’s not forget the Back to the Future DeLorean (is this a mandatory booth?) or the Ghostbusters‘ Ecto-1, but what else is there to do at a comic-con? Plenty. But you might have to dig around for it.

George Miller’s new movie in the Mad Max franchise, Fury Road, has given rise to a resurgence in the universe’s popularity. Not only was a demo version of the upcoming Mad Max video game from Warner Bros. Interactive Entertainment on display, but also the Mad Max car. Although, whether or not the car on display actually appeared in the movie was never made clear, it was a solidly crafted piece of machinery with a running engine. But, looking at it up close, some of the post-apocalyptic realism was diminished by some brand-new joints, such as those on the carburetor and throttle. Still very cool to see though.

No.4 LED Movie Light Boxes for Posters and Jerseys

These LED Movie Light Boxes are something every movie fan or sports junkie should have to enhance the display of their favorite movies, movie posters, and/or prized sports jerseys. Handcrafted in Canada since 2013, these light-weight frames don’t generate heat, thanks to the LED lighting, and with the easy snap system it’s super easy to swap posters in and out. So, if you’ve got a man cave, a theater room, or if you just want to give some superpowers to your decor, you can’t go wrong with this product.

Every superhero like Tony Stark, Bruce Banner, or Hawkeye needs a super watch like those that Division-Furtive offers. With a few different models available, Division-Furtive had the Type 50 on display at the Montreal Comiccon, and it was definitely an eye-catcher with its simple gold-on-black and flashing LED light aesthetics. Basically, the watch is in the “off” state until a wrist rotation is detected, at which point an LED light indicates the hour and another one the minutes. The Type 50 also uses its LED lights to provide a flashlight function, you know, for those sleuthing superheros on covert operations.

LARPing (live-action role playing) is gaining momentum in the province of Quebec. And among the leading providers of custom equipment is Les Artisans Azure, based in Montreal. We came across their booth at the Montreal Comiccon and were blown away by the quality of their craftsmanship, from the clean cuts and lines to the staining to the toughness of the stitching and to the rivets. The shop has done custom work for films and for those with special needs, such as creating a leather suit of armor that looks like metal for someone who couldn’t wear something so heavy. (If you check out the helm in the picture above, you’ll see an example of leather looking like metal.) The staff is also knowledgeable (because they actually participate) about LARPing, so whether your new or old in the activity, they’ll be able to help you out with any questions you might have.

For more information or to place an order go to artisansdazure.com.

Well, being horror fans ourselves, we couldn’t help but to be impressed by the wares on display from custom leather book maker Mille Cuirs. From the covers that resemble the Evil Dead‘s Necronomicon to Death Note replicas to Zelda offerings and just so much more demonic fun. Made from genuine lambskin and acid-free pages of varying thickness and aged with tea, these blank books are sure to satisfy many needs, whether you need an autograph book, a spell book, a journal, or just exceptional pieces for your bookshelf.