“The Evil Dead” Remake Is So Bloody, It Will Make Your Head Spin” According To Sam Raimi [INTERVIEW] 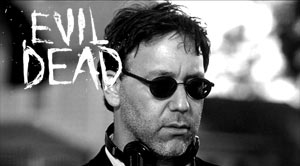 A report surfaced yesterday concerning the unauthorized sequel to Sam Raimi’s Evil Dead trilogy, subtitled Consequences. The film is in the midst of completely falling apart after a lawsuit was filed by Raimi against the production company (Award Pictures) that’s been planning to make the sequel without Raimi’s involvement, or anyone else linked to the original Evil Dead. After Award Pictures’ President Glenn MacCrae failed to respond in court the other day, the decision went in Raimi’s favor.

According to MacCrae, he still plans to challenge the lawsuit once his company is financially stable and is able to pay lawyers for his defense. MacCrae argues that Sam Raimi’s company shows no interest in extending the Evil Dead franchise, and as proof he referenced a comment by Raimi from a book released years ago that he would never touch another Evil Dead sequel. So, in the eyes of MacCrae the trademark is abandoned, and believes he has the right to use the title for a new take on the property. However, that’s not entirely valid because we all know that Raimi may never want to do a sequel in the franchise, but is 100% involved with The Evil Dead remake as he wrote the screenplay for it with other notable writers including Diablo Cody, and openly talked about the remake in a recent interview with Collider.

Raimi says that the film is so bloody it will make your head spin, that it will be R-rated, and so much more. So, I have a strong feeling Glenn MacCrae’s case will be hard to defend in court as time moves on, and to convince a judge to take his side of the story. I only hope that MacCrae hasn’t invested much money in Evil Dead 4: Consequences, and will be able to walk away from the project unharmed.

Collider: One of the great things about your Evil Dead movies is that you weren’t afraid to show blood and gore. Will the remake be as bloody, or is it more of a PG-13 release?

Raimi: It’s really bloody. It’s so bloody, it will make your head spin. I’ve seen almost all the dailies and they’re really going for it. It’s gonna be grisly and intense and non-stop.

Collider: Does that mean it will have to be R-rated then?

Collider: How involved were you with the film, and what can fans look forward to with the remake?

Raimi: Well, I always thought that Evil Dead was a little campfire story that you tell at a camp to kids to scare them at night. But, I don’t think anybody thought it was a beautifully produced, theatrical experience. It was shot in 16mm, all the effects were done for a quarter, and I always thought it could be done in a big screen movie type way that was really high quality with photographic effects. It could still be just as gritty, but it could be done in stereo and not just mono, and it could be done in 35mm versus 16mm. There were a lot of ways to improve it. There could be much better writing than I was capable of, at the time, as an 18-year-old kid writing that screenplay. And honestly, the directing could be a lot better, and the characterizations could be better. I was very happy with it, but it was something that was crudely done and I thought deserved re-exploration. I thought it would be fun and, in fact, it has turned out to be a tremendous amount of fun because it’s like an old melody that you write and you’ve brought in this really great, cool, young, hip jazz musician, and he’s riffing on it and showing you places it could go that you never dreamed. It’s very exciting for me.

Head over to Collider for the full interview with Sam Raimi on The Possession, and The Evil Dead remake.