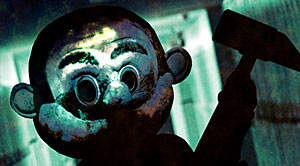 Bloody hell! It’s already been nearly two weeks since the Montreal HorrorFest announced their first wave of feature films that is scheduled to screen during the big ComicCon event slated for September 14th till the 16th.

Today, they released information on four new additional feature films, and 17 shorts including this kick ass 14 inch resin trophy hand painted by Graveyard Kits that will be given to the lucky winners of the 2012 Montreal HorrorFest.

The additional lineup of films follows after the picture. Enjoy, and spread the word!